Darell Wayne Fields is an accomplished teacher and scholar. He has taught design, urbanism and theory at several universities including Harvard Graduate School of Design, California College of the Arts in San Francisco, and the University of California Berkeley. He has exhibited theoretical and provocative work at the Whitney Museum of American Art, the Studio Museum in Harlem, the August Wilson Center for African American Culture in Pittsburgh and CentralTrak in Dallas. His professional architectural work includes the design of the W.E.B. Du Bois Institute for African and African American Research at Harvard University.

His forthcoming book, Architecture in Black, 2nd ed. (March 2015), by Bloomsbury Publishing, is described by the philosopher, Cornel West, as “the first theoretical treatment of race in architectural discourse.” Attempting to answer the question, “What does blackness have to do with architecture?” the book is part of a larger aesthetic endeavor, the Black Architecture Project—a mapping of identity and the racial divide through theoretical projects, conceptual reconstructions, lectures and writing. 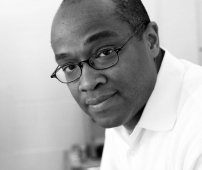