Air and the Politics of Resistance 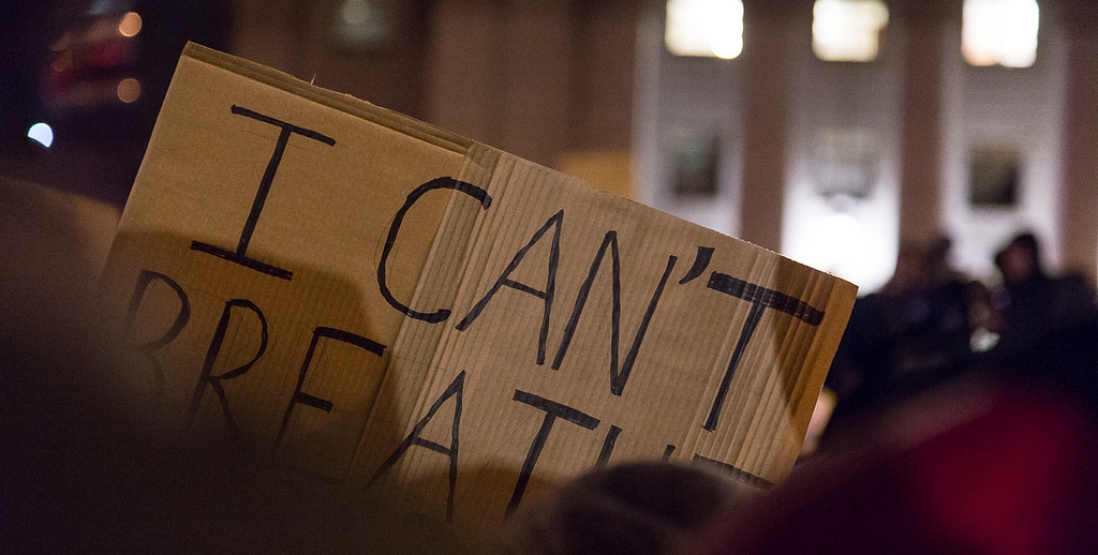 Like every shared life, politics is the art of the atmospherically possible.1

Chants of “We can’t breathe” echoed across US streets for weeks. Eric Garner’s last gasped words—collectivized—have become a slogan expressing shared anger at an epidemic of police brutality, racism, and state violence. People carry placards that read, “Choke the system” and “Is breathing a white privilege?” In Palestine, protesters cry, “We can’t breathe” after a minister in the Palestinian Authority is killed after inhaling tear gas while planting olive trees in the West Bank. When New York cops hold a pro-police rally (at which they are far outnumbered by counter-protesters), they wear T-shirts that read, “I can breathe … thanks to the NYPD.” When two NYPD officers are shot the next day, rapper The Game tweets: “I guess y’all can’t breathe.”

These extrapolations of Garner’s last words are so powerful because they link the ubiquity of racism to the most fundamental of bodily habits. Describing oppression as the inability to breathe poses politics in a radical, luminous manner. It elicits and enacts a corporeal objection to the current ontological order by linking abstract concepts to the act of inhalation, which takes place for each person an average of 20,000 times per day. This radical phrasing, however, may be too quickly taken emblematically, wherein breathing and choking serve as stand-ins for oppression and resistance. While there is value in such a move, I suggest that we take the politics of breath in the most literal manner possible, positing the air as a central medium and stake of contemporary political struggles. In particular, I want to briefly sketch out some ways that the politics of air can reconfigure architectures of resistance.

The work of German philosopher Peter Sloterdijk offers one productive opening for taking seriously the air conditions of Garner’s murder and the atmosphere of resistance that it generated. For Sloterdijk, being is defined as an act of interiorization: to live we must necessarily construct interiors, what Sloterdijk refers to as spheres. We are never just there, we are always contained in something, and we are constantly constructing interiors in which to contain ourselves and/with others. Humans cannot be in a pure outside, for even when we are out of doors, we are still contained in the atmosphere. Spheres—including atmospheres—are “air conditioning systems in whose construction and calibration, for those living in real coexistence, it is out of the question not to participate.”2 We might breathe through different orifices, with varying levels of mechanical assistance or chemical support, but we can’t help but breathe.

In modern political thought, the air—along with water, plants, and so on—was thought of as a component of the commons, part of the “free gift[s] of Nature,” about which Marx would write.3 Yet, it is more appropriate to conceive of air as part of the singular common that Michael Hardt and Antonio Negri theorize. This common is socially produced and “does not position humanity separate from nature … but focuses rather on the practices of interaction, care, and cohabitation in a common world.”4 Hardt and Negri’s notion of the common is important here because it emphasizes the production and distribution of the common. For the air may be a common element and product, but its commonness in no way implies equality. As Sloterdijk writes, “the unavailability of some persons to differently-attuned, differently-enveloped, and differently-air conditioned others is indeed more and more evident.”5

We can see this uncommonness of the common in Garner’s death. When officer Daniel Pantaleo placed Garner in a chokehold, and when Pantaleo along with Justin Damico and several other officers placed Garner in a prone position and piled on top of him, compressing his lungs, they withheld air from him. Even prior to the police assault, Garner’s ability to inhale and exhale air from the atmosphere had been limited by asthma. The patterns of capitalist development and urbanization have spatialized race along lines that often coincide with those of industrialization, engendering racialized rates of asthma. A recent study found that Black and Puerto Rican children are 1.6 to 2.5 times more likely than are white children to develop asthma.6 A wide-ranging study focusing on differential exposure to nitrogen dioxide, a toxic gas produced by internal combustion through the operation of automobiles and industrial production processes, found that people of color are on average exposed to 38 percent more nitrogen dioxide than white people, and this differential exposure gap widens in urban areas.7

How might air conditions enable resistance to oppressive atmospheres? I here propose three ways of mobilizing the pneumatic that can help to reorient, recompose, and push forward political struggles. I submit the following three propositions: (1) the air’s visibility—its opacity or transparency—works to determine the possibilities of movement and contestation in the streets; (2) the air also signals the irreducibility of the common, the stake of all political struggle; and (3) the air dissolves conceptions of individual subjectivity by instituting an inescapable relationality and dependency at the heart of being.

First, the air conditions of protest contribute to the affective states of insurgency. Consider the air as a carrier of light in the Ferguson rebellions that took place over the summer and fall of 2014. During daytime, the air revealed clearly the movement of protesters to police from near and far. As a result, daytime protests fit neatly within the identity of “free speech” exercises in bourgeois democracies, and they were characterized by relative order centering on planned assemblings and marches.8

When night fell, however, the air in the streets changed as “orderly” protest turned to rebellion and resistance. Under cover of night, marches erupted spontaneously, crosshairs aimed at private property, expropriations took place, and cop cars were torched. Police would try to gain the atmospheric upper hand by projecting tear-gas canisters into the assemblings, which people would promptly hurl back. The police found it difficult to monitor from afar, and were thus invited by protesters into proximate confrontation. I don’t mean to simplify this situation into a dichotomy in which clear air limits intransigence while cloudy air enables it, even if there is a dialectical relationship between organization and spontaneity. (As Antonio Negri formulates it, “Organization is spontaneity reflecting upon itself.”9 ) The point is rather that differing levels of visibility generated contrasting aerial-affective states and interactions, producing distinctive atmospheres and enabling particular movements and expressions.

Second, the air figures the irreducibility of the common, even in the air’s deadly uncommonness.10 It is uniquely and radically resistant to acts of enclosure. Air is enclosed, compressed, bottled, and traded on the market for medicinal, recreational, and other uses. It is enclosed by buildings, which create privileged interiors through exclusion. And air is routinely degraded through pollution and the industrial emissions market. But still, the air is too unwieldy, evasive, and extensive to be properly subjected to enclosure on a mass scale.

It doesn’t follow, however, that the air unites—or should unite—everyone. There is no place for any such universalizing humanism here. As many Black organizers in the Black Lives Matter movement have pointed out, we have to attend to power differences, racial and otherwise, within the composition of the movement. This is not out of any “we-skepticism,” or the notion that in order to say “we” there must be “a concrete, delineable, empirical referent.” Jodi Dean correctly identifies such we-skepticism as the erasure “of the division necessary for politics.”11 It is rather to insist that so long as there is a “we” that can’t breathe, there will be a “they” that, by virtue of their structural relationship to the means of air conditioning, prevents breath from taking place. This is the lesson that the air conditions of Garner’s murder have to teach the environmentalist movement, particularly its recent manifestation in “People’s Climate Marches.” Politics requires an enemy and so is necessarily exclusive. Thus, ambiguous invocations to “choke the system” are completely adequate responses to the struggle over air conditions—for in order for us to breathe, others will have to be choked (literally or figuratively).

Third, by turning to the air—the sphere, the shared interior—we gain a deeper understanding of and a new architecture for collective being. In spheres the “subject … is containing, in so far as it absorbs and grasps other subjective elements, and contained, in so far as it is encompassed and devoured by the circumspections and arrangements of others.”12 The air is necessarily shared, and through the breath that sustains us, others literally enter into and circulate through us. Theresa Brennan describes this founding and sustaining affective relationality through the transmission of pheromones, those faint excreted chemicals directed toward others that communicate various things like fear, excitement, or anxiety to others. Pheromones “act as direction-givers which, as molecules, traverse the physical space between one subject and another, and factor in or determine the direction taken by the subject who inhales or absorbs them.”13

The subject-collective of those who demand the right to inhalation, then, fundamentally challenges the ideology of the atomized individual: the sovereign, autonomous subject that is strictly delineated from the other. It is the conceptualization of ourselves and others as this particular type of subject that presents one of the dominant challenges for the organization of resistance to capitalist exploitation and the various forms and institutions of oppression that it engenders. As Dean observes, “our political problem differs in a fundamental way from that of communists at the beginning of the twentieth century—we have to organize individuals; they had to organize masses.”14 The atomized individual, this dominant subjectivity upon which capitalism and private property rest, is penetrated by virtue of the demand for breath.15

“Pneumatics and revolution agree well,” wrote Marc Dessauce.16 The air has generally stood as an image of change, as when Marx and Engels describe capitalism’s constant revolutionizing of production with the lyrical phrase, “All that is solid melts into air.”17 Yet, the air isn’t just a metaphor; it is the enveloping and constituting medium of co-habitation. It is the stake of politics. To state, “We can’t breathe”—to struggle for the right to inhalation—is to demand and enact the right to participate in the production of the pneumatic common.

As chants of “we can’t breathe” link the ubiquity of racism to the most fundamental of bodily habits, air conditions enable resistance to oppressive atmospheres.